1. Refer to the exhibit.

Router R3 is receiving multiple routes through the EIGRP routing protocol. Which statement is true about the implementation of summarization in this network?

Automatic summarization is disabled on R3.*

Automatic summarization is disabled on a per-interface basis.

Which two routes will be advertised to the router ISP if autosummarization is disabled? (Choose two.)

3. What is the purpose of a Null0 route in the routing table?

to redistribute external routes into EIGRP

to act as a gateway of last resort

to prevent the router from sending EIGRP packets

4. Refer to the exhibit. 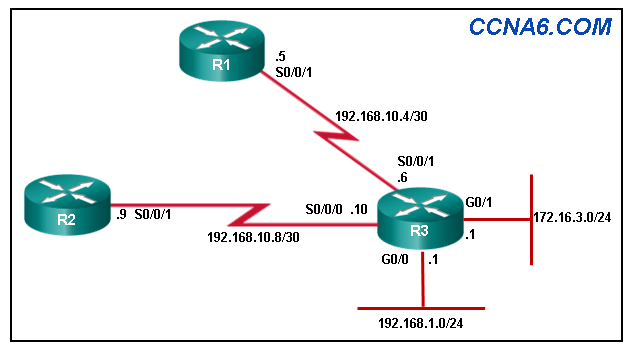 All networks are active in the same EIGRP routing domain. When the auto-summary command is issued on R3, which two summary networks will be calculated on R3? (Choose two.)

It maximizes the number of routes in the routing table.

It increases the size of routing updates.

It reduces the frequency of routing updates.*

It ensures that traffic for multiple subnets uses one path through the internetwork.*

It improves reachability in discontiguous networks.

It decreases the number of entries in the routing table.*

6. Assuming that EIGRP is enabled on both routers and automatic summarization is enabled, what must be configured to ensure that R1 will be able to reach the 2.2.2.0/24 network?

Use the command no auto-summary to disable automatic summarization.*

Use the command ip address-summary to ensure that R1 recognizes the 2.2.2.0 network.

EIGRP supports VLSM and will automatically recognize the 2.2.2.0 network.

EIGRP does not support VLSM and therefore cannot be used with discontiguous networks.

7. Refer to the exhibit.

Which statement is supported by the output?

A static default route has been manually configured on this router.

Summarization of routes has been manually configured.

A default route is being learned through an external process.*

The route to 192.168.1.1 represents the configuration of a loopback interface.

8. Which two steps must be taken in order to send a default route to other EIGRP routers? (Choose two.)

9. What is the administrative distance of externally learned EIGRP routes?

10. Two routers, R1 and R2, share a 64 kb/s link. An administrator wants to limit the bandwidth used by EIGRP between these two routers to 48 kb/s. Which command is used on both routers to configure the new bandwidth setting?

Which two conclusions can be drawn from the exhibited configuration? (Choose two.)

Any EIGRP-learned route with a metric less than 3 times the successor metric will be installed in the local routing table.*

Any EIGRP-learned route with a metric equal to 3 times the successor metric will be installed in the local routing table.

13. By default, how many equal-cost routes to the same destination network will EIGRP install in the routing table?

14. What is the default maximum amount of bandwidth that can be used for exchanging EIGRP messages on an EIGRP-configured interface? 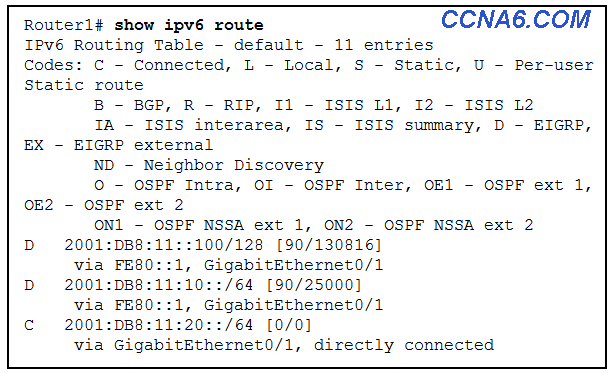 An administrator wants EIGRP on Router1 to load balance traffic to network 2001:db8:11:10::/64 across two interfaces. Currently traffic is using only interface GigabitEthernet0/1. A second route, not in the routing table, is available with a metric of 264000. What value is needed in the variance command to make EIGRP put the second route into the routing table?

16. When a Cisco router is configured with fast-switching, how are packets distributed over equal-cost paths?

on a per-packet basis

on a per-interface basis

17. Which command can be issued on a router to verify that automatic summarization is enabled? 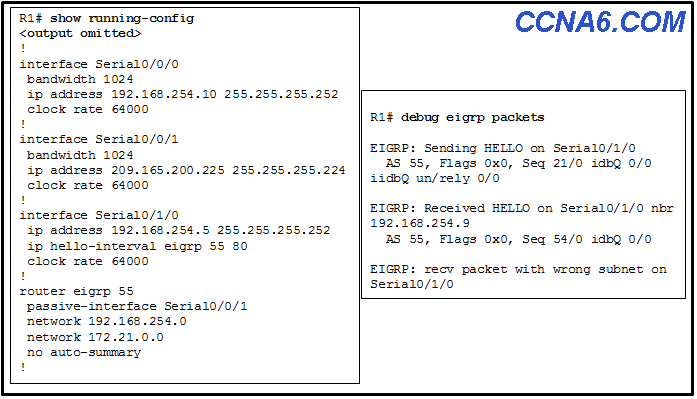 After the configuration shown is applied on router R1, the exhibited status message is displayed. Router R1 is unable to form a neighbor relationship with R2 on the serial 0/1/0 interface. What is the most likely cause of this problem?

The passive-interface command should have been issued on serial 0/1/0.

The hello interval has been altered on serial 0/1/0 and is preventing a neighbor relationship from forming.

The network statement used for EIGRP 55 does not enable EIGRP on interface serial 0/1/0.

The IPv4 address configured on the neighbor that is connected to R1 serial 0/1/0 is incorrect.*

The networks that are configured on serial 0/0/0 and serial 0/1/0 of router R1 are overlapping. 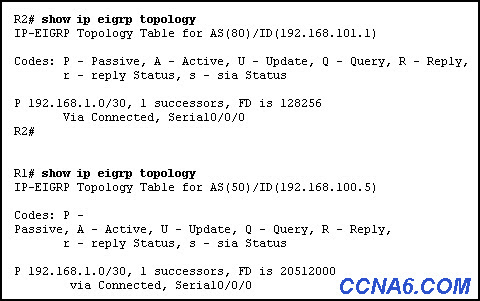 What action should be taken to solve this problem?

Enable the serial interfaces of both routers.

Configure the same hello interval between the routers.

Configure both routers with the same EIGRP autonomous system number.* 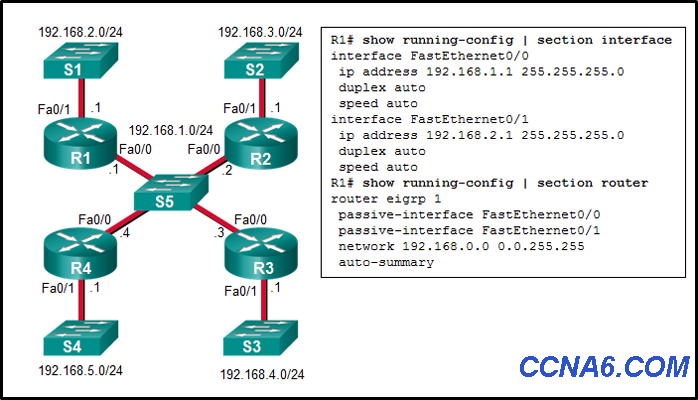 because the automatic summarization is enabled on R1

21. In which scenario will the use of EIGRP automatic summarization cause inconsistent routing in a network?

when there is no adjacency that is established between neighboring routers

when there is no common subnet that exists between neighboring routers 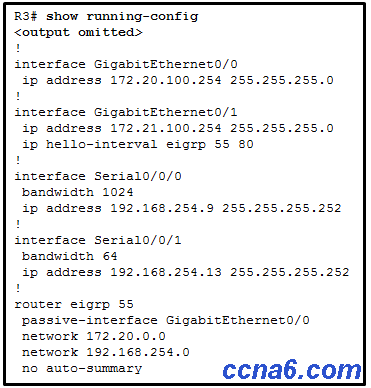 The passive-interface command is preventing neighbor relationships on interface GigabitEthernet 0/0.

The hello timer has been modified on interface GigabitEthernet 0/1 of R3 and not on the neighbor, causing a neighbor adjacency not to form.

The GigabitEthernet 0/1 interface is not participating in the EIGRP process.*

The GigabitEthernet interfaces are not limiting the flow of EIGRP message information and are being flooded with EIGRP traffic.

23. Fill in the blank. Do not use abbreviations.

The “passive-interface” command causes an EIGRP router to stop sending hello packets through an interface.

24. Fill in the blank. Do not use abbreviations.

The command to propagate the default route from the router Border to the rest of the EIGRP domain is Border(config-router)# “redistribute static” .

R1 and R2 could not establish an EIGRP adjacency. What is the problem?​

EIGRP is down on R2.

R1 Fa0/0 is not configured to send hello packets.