2. What is the purpose of using protocol-dependent modules in EIGRP?

to use different transport protocols for different packets

3. If all router Ethernet interfaces in an EIGRP network are configured with the default EIGRP timers, how long will a router wait by default to receive an EIGRP packet from its neighbor before declaring the neighbor unreachable?

4. Which statement describes a characteristic of the delivery of EIGRP update packets?

6. Which destination MAC address is used when a multicast EIGRP packet is encapsulated into an Ethernet frame?

7. What is identified within the opcode of an EIGRP packet header?

the EIGRP hold timer agreed upon with a neighbor

the EIGRP sum of delays from source to destination

8. An administrator issues the router eigrp 100 command on a router. What is the number 100 used for?

as the autonomous system number*

as the number of neighbors supported by this router

as the maximum bandwidth of the fastest interface on the router

9. Why would a network administrator use a wildcard mask in the network command when configuring a router to use EIGRP?

to lower the router overhead

to send a manual summarization

to exclude some interfaces from the EIGRP process*

to subnet at the time of the configuration

10. What information does EIGRP maintain within the routing table?

all routes known to the router

11. Which table is used by EIGRP to store all routes that are learned from EIGRP neighbors?

12. Which command or commands must be entered on a serial interface of a Cisco router to restore the bandwidth to the default value of that specific router interface?

13. Which three metric weights are set to zero by default when costs in EIGRP are being calculated? (Choose three.)

14. A new network administrator has been asked to verify the metrics that are used by EIGRP on a Cisco device. Which two EIGRP metrics are measured by using static values on a Cisco device? (Choose two.) 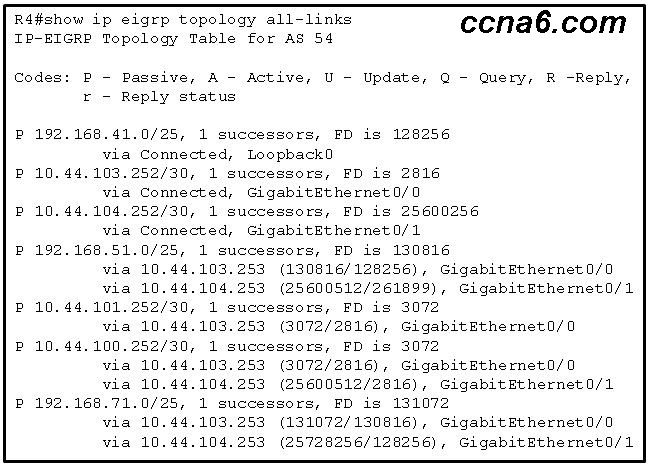 16. A network administrator wants to verify the default delay values for the interfaces on an EIGRP-enabled router. Which command will display these values?

R3 has two possible paths to the 172.16.99.0 network. What is the reported distance of the feasible successor route?

R2 has two possible paths to the 192.168.10.4 network. What would make the alternate route meet the feasibility condition?

an administrative distance less than 170

19. Which two factors does an EIGRP router use to determine that a route to a remote network meets the feasible condition and is therefore loop-free? (Choose two.)

the successor route on a neighbor router

the feasible successor route on the remote router

the reported distance on a neighbor router*

the administrative distance on the remote router

the feasible distance on the local router*

20. Which configuration is necessary to ensure successful operation of EIGRP for IPv6?

The eigrp router-id command requires an IPv6 address within the router configuration mode.​

The network command is required within the router configuration mode.​

The no shutdown command is required within the router configuration mode.​*

The router eigrp autonomous-system command is required within the router configuration mode.

21. Fill in the Blank. Use the abbreviation.

In an EIGRP topology table, a route that is in a/an “active” state will cause the Diffusing Update Algorithm to send EIGRP queries that ask other routers for a path to this network.

23. Order the precedence in which an EIGRP router would choose the router ID. (Not all options are used.)

24. Match the correct version of EIGRP with the EIGRP features. (Not all options are used.)

Which code is displayed on the web server?