2. What network design would contain the scope of disruptions on a network should a failure occur?

the installation of only enterprise class equipment throughout the network

3. Which action should be taken when planning for redundancy on a hierarchical network design?

immediately replace a non-functioning module, service or device on a network

implement STP portfast between the switches on the network

add alternate physical paths for data to traverse the network*

4. Refer to the exhibit. 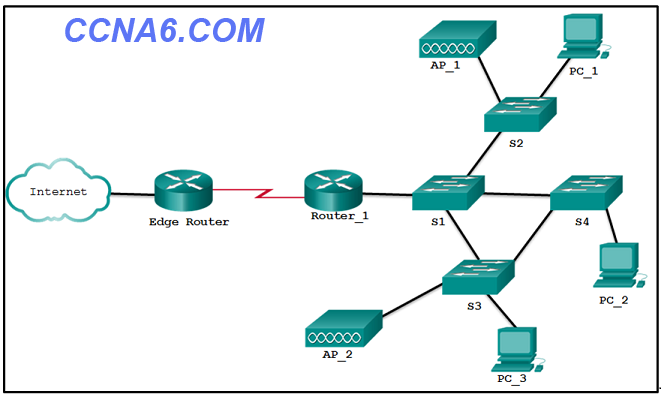 Which devices exist in the failure domain when switch S3 loses power?

5. Which design feature will limit the size of a failure domain in an enterprise network?

the use of a collapsed core design

the use of the building switch block approach*

the installation of redundant power supplies

6. A network administrator is planning redundant devices and cabling in a switched network to support high availability. Which benefit will implementing the Spanning Tree Protocol provide to this design?

Multiple physical interfaces can be combined into a single EtherChannel interface.

Redundant paths can be available without causing logical Layer 2 loops.*

Network access can be expanded to support both wired and wireless devices.

7. What are two benefits of extending access layer connectivity to users through a wireless medium? (Choose two.)

9. What capability is provided by the use of application-specific integrated circuits in Cisco multilayer switches?

protecting data traffic in the event of a failed circuit

forwarding of IP packets independent of the CPU*

10. Which statement describes a characteristic of Cisco Meraki switches?

They are cloud-managed access switches that enable virtual stacking of switches.*

They are campus LAN switches that perform the same functions as Cisco 2960 switches.

They are service provider switches that aggregate traffic at the edge of the network.

11. In which situation would a network administrator install a Cisco Nexus Series or Cisco Catalyst 6500 Series switch to promote infrastructure scalability?

to enable virtual stacking of switches to provide cloud-managed access

on a service provider network to promote integrated security, and simplified management

on a data center network to provide expansion and transport flexibility*

on a campus LAN network as access layer switches

12. Which statement describes a characteristic of Cisco Catalyst 2960 switches?

They do not support an active switched virtual interface (SVI) with IOS versions prior to 15.x.

They are best used as distribution layer switches.

They are modular switches.

13. What are three access layer switch features that are considered when designing a network? (Choose three.)

It controls the flow of data via the use of Layer 2 addresses.

It determines the best path to send packets.*

It manages the VLAN database.

It increases the size of the broadcast domain.

15. A network engineer is reviewing a network design that uses a fixed configuration enterprise router that supports both LAN and WAN connections. However, the engineer realizes that the router does not have enough interfaces to support growth and network expansion. Which type of device should be used as a​​ replacement?

17. Immediately after a router completes its boot sequence, the network administrator wants to check the routers configuration. From privileged EXEC mode, which of the following commands can the administrator use for this purpose? (Choose two.)

Which command was issued on a Cisco switch that resulted in the exhibited output?

19. What is a characteristic of in-band device management?

It uses a terminal emulation client.

It is used for initial configuration or when a network connection is unavailable.

It uses a direct connection to a console or AUX port.

It is used to monitor and make configuration changes to a network device over a network connection.*

20. Which two requirements must always be met to use in-band management to configure a network device? (Choose two.)

a direct connection to the console port

a direct connection to the auxiliary port

at least one network interface that is connected and operational*

21. Which type of information is displayed by the show ip protocols command that is issued from a router command prompt?

interface information, including whether an ACL is enabled on the interface

22. A network technician needs to connect a PC to a Cisco network device for initial configuration. What is required to perform this device configuration?

at least one operational network interface on the Cisco device

23. Match the purpose to the related configuration item. (Not all options are used.)