1. What are three primary benefits of using VLANs? (Choose three.)

a reduction in the number of trunk links

2. Which type of VLAN is used to designate which traffic is untagged when crossing a trunk port?

between a switch and a client PC

between a switch and a network printer

4. What must the network administrator do to remove Fast Ethernet port fa0/1 from VLAN 2 and assign it to VLAN 3?

Enter the no vlan 2 and the vlan 3 commands in global configuration mode.

Enter the no shutdown command in interface configuration mode to return it to the default configuration and then configure the port for VLAN 3.

5. When a Cisco switch receives untagged frames on a 802.1Q trunk port, which VLAN ID is the traffic switched to by default?

6. Port Fa0/11 on a switch is assigned to VLAN 30. If the command no switchport access vlan 30 is entered on the Fa0/11 interface, what will happen?

An error message would be displayed.

VLAN 30 will be deleted.

7. Which command is used to remove only VLAN 20 from a switch?

8. What happens to a port that is associated with VLAN 10 when the administrator deletes VLAN 10 from the switch?

The port goes back to the default VLAN.

The port automatically associates itself with the native VLAN.

The port creates the VLAN again.

CDP can be used to learn and store these VLANs.

They are saved in the running-config file by default.*

VLANs are initialized from flash memory.

They are commonly used in small networks.

10. A Cisco switch currently allows traffic tagged with VLANs 10 and 20 across trunk port Fa0/5. What is the effect of issuing a switchport trunk allowed vlan 30 command on Fa0/5?

It allows a native VLAN of 30 to be implemented on Fa0/5.

11. Refer to the exhibit. PC-A and PC-B are both in VLAN 60. PC-A is unable to communicate with PC-B. What is the problem? 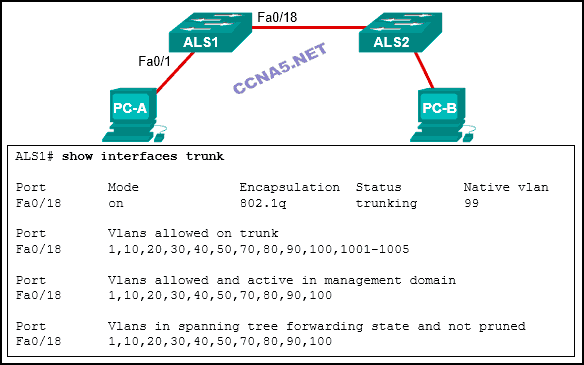 The native VLAN should be VLAN 60.

The native VLAN is being pruned from the link.

The trunk has been configured with the switchport nonegotiate command.

The VLAN that is used by PC-A is not in the list of allowed VLANs on the trunk.*

13. What is a characteristic of legacy inter-VLAN routing?

Only one VLAN can be used in the topology.

The router requires one Ethernet link for each VLAN.*

The user VLAN must be the same ID number as the management VLAN.

Inter-VLAN routing must be performed on a switch instead of a router.

14. What is a disadvantage of using router-on-a-stick inter-VLAN routing?

does not support VLAN-tagged packets

does not scale well beyond 50 VLANs*

The router will drop the packet.

The router will forward the packet out interface FastEthernet 0/1.1.

The router will forward the packet out interface FastEthernet 0/1.2.*

The router will forward the packet out interface FastEthernet 0/1.3.

16. Refer to the exhibit. In what switch mode should port G0/1 be assigned if Cisco best practices are being used? 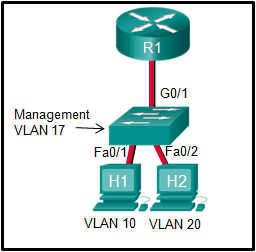 17. A small college uses VLAN 10 for the classroom network and VLAN 20 for the office network. What is needed to enable communication between these two VLANs while using legacy inter-VLAN routing?

A router with at least two LAN interfaces should be used.*

Two groups of switches are needed, each with ports that are configured for one VLAN.

A router with one VLAN interface is needed to connect to the SVI on a switch.

A switch with a port that is configured as trunk is needed to connect to a router.

18. Refer to the exhibit. A network administrator needs to configure router-on-a-stick for the networks that are shown. How many subinterfaces will have to be created on the router if each VLAN that is shown is to be routed and each VLAN has its own subinterface? 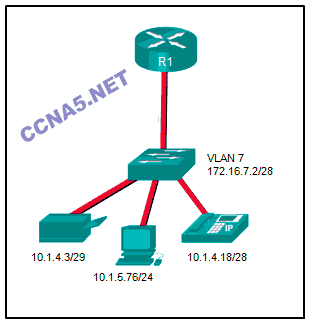 19. When configuring a router as part of a router-on-a-stick inter-VLAN routing topology, where should the IP address be assigned?

20. A high school uses VLAN15 for the laboratory network and VLAN30 for the faculty network. What is required to enable communication between these two VLANs while using the router-on-a-stick approach?

A multilayer switch is needed.

A router with at least two LAN interfaces is needed.

Two groups of switches are needed, each with ports that are configured for one VLAN.

A switch with a port that is configured as a trunk is needed when connecting to the router.* 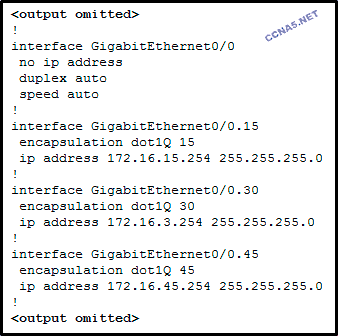 The wrong VLAN has been configured on GigabitEthernet 0/0.45.

The command no shutdown is missing on GigabitEthernet 0/0.30.

The GigabitEthernet 0/0 interface is missing an IP address.

There is an incorrect IP address configured on GigabitEthernet 0/0.30.*

22. Match the IEEE 802.1Q standard VLAN tag field with the descriptions. (Not all options are used.)

Place the options in the following order:
User Priority –> value that supports level or service implementation
Type –> value for the tag protocol ID value
Canonical Format Identifier –> identifier that enables Token Ring frames to be carried across Ethernet Links
– not scored – -value for the application protocol of the user data in a frame
VLAN ID –> VLAN number

23. Fill in the blank. Use the full command syntax.

The show vlan command displays the VLAN assignment for all ports as well as the existing VLANs on the switch.

24. Open the PT Activity. Perform the tasks in the activity instructions and then answer the question. 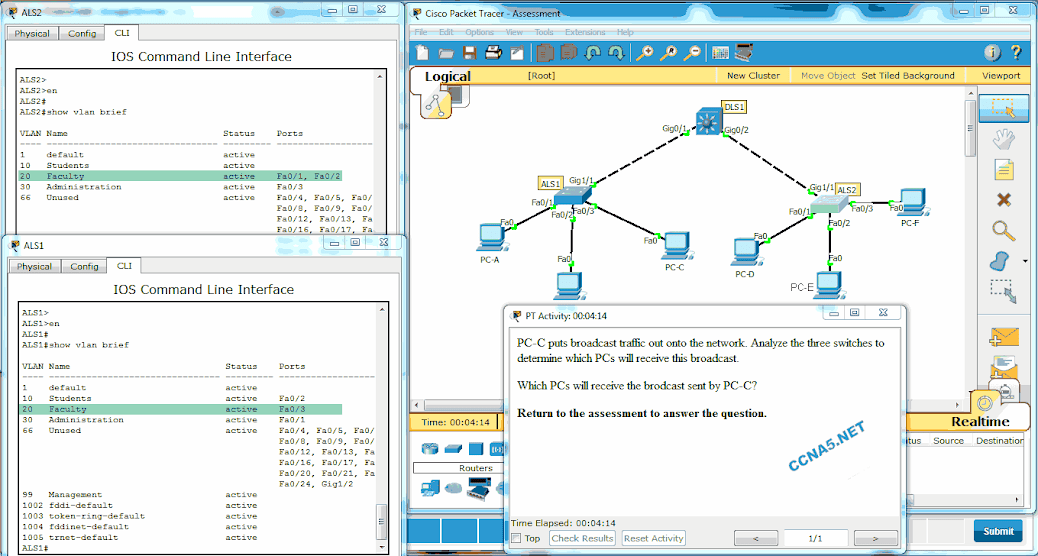 Which PCs will receive the broadcast sent by PC-C?