1. What are two reasons for physical layer protocols to use frame encoding techniques? (Choose two.)

to reduce the number of collisions on the media

to identify where the frame starts and ends*

to increase the media throughput

2. What is indicated by the term throughput?

the guaranteed data transfer rate offered by an ISP

the capacity of a particular medium to carry data

the measure of the usable data transferred across the media

3. A network administrator notices that some newly installed Ethernet cabling is carrying corrupt and distorted data signals. The new cabling was installed in the ceiling close to fluorescent lights and electrical equipment. Which two factors may interfere with the copper cabling and result in signal distortion and data corruption? (Choose two.)

the distortion of the network signal from fluorescent lighting

the weakening of the network signal over long cable lengths

5. What technique is used with UTP cable to help protect against signal interference from crosstalk?

twisting the wires together into pairs*

wrapping a foil shield around the wire pairs

encasing the cables within a flexible plastic sheath

6. Refer to the exhibit. The PC is connected to the console port of the switch. All the other connections are made through FastEthernet links. Which types of UTP cables can be used to connect the devices?

7. Refer to the exhibit. What is wrong with the displayed termination? 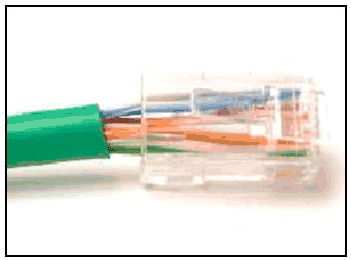 The woven copper braid should not have been removed.

The wrong type of connector is being used.

The untwisted length of each wire is too long.*

The wires are too thick for the connector that is used.

8. Which type of connector does a network interface card use?

9. What is one advantage of using fiber optic cabling rather than copper cabling?

It is usually cheaper than copper cabling.

It is able to be installed around sharp bends.

It is easier to terminate and install than copper cabling.

It is able to carry signals much farther than copper cabling.*

10. Why are two strands of fiber used for a single fiber optic connection?

The two strands allow the data to travel for longer distances without degrading.

They prevent crosstalk from causing interference on the connection.

They increase the speed at which the data can travel.

They allow for full-duplex connectivity.*

11. A network administrator is designing the layout of a new wireless network. Which three areas of concern should be accounted for when building a wireless network? (Choose three.)

12. Which layer of the OSI model is responsible for specifying the encapsulation method used for specific types of media?

13. What are two services performed by the data link layer of the OSI model? (Choose two.)

It determines the path to forward packets.

It accepts Layer 3 packets and encapsulates them into frames.*

It monitors the Layer 2 communication by building a MAC address table.

14. What is true concerning physical and logical topologies?

Physical topologies are concerned with how a network transfers frames.

Physical topologies display the IP addressing scheme of each network.

Logical topologies refer to how a network transfers data between devices.*

15. Which method of data transfer allows information to be sent and received at the same time?

End devices are connected together by a bus and each bus connects to a central intermediate device.

Each end system is connected to its respective neighbor via an intermediate device.

All end and intermediate devices are connected in a chain to each other.

17. Refer to the exhibit. Which statement describes the media access control methods that are used by the networks in the exhibit? 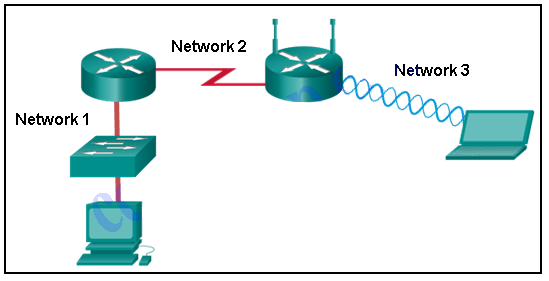 All three networks use CSMA/CA

18. What is contained in the trailer of a data-link frame?

19. As data travels on the media in a stream of 1s and 0s how does a receiving node identify the beginning and end of a frame?

The transmitting node inserts start and stop bits into the frame.*

The transmitting node sends a beacon to notify that a data frame is attached.

The receiving node identifies the beginning of a frame by seeing a physical address.

The transmitting node sends an out-of-band signal to the receiver about the beginning of the frame.

20. What is the function of the CRC value that is found in the FCS field of a frame?

to verify the integrity of the received frame*

to verify the physical address in the frame

to verify the logical address in the frame

What acronym is used to reference the data link sublayer that identifies the network layer protocol encapsulated in the frame? LLC

A physical topology that is a variation or combination of a point-to-point, hub and spoke, or mesh topology is commonly known as a hybrid topology.

24. Match the characteristics to the correct type of fiber. (Not all options are used.)