1. What method can be used by two computers to ensure that packets are not dropped because too much data is being sent too quickly?

2. What type of communication will send a message to all devices on a local area network?

3. What process is used to place one message inside another message for transfer from the source to the destination?

4. A web client is sending a request for a webpage to a web server. From the perspective of the client, what is the correct order of the protocol stack that is used to prepare the request for transmission?

5. Which statement is correct about network protocols?

Network protocols define the type of hardware that is used and how it is mounted in racks.

They define how messages are exchanged between the source and the destination.*

They all function in the network access layer of TCP/IP.

They are only required for exchange of messages between devices on remote networks.

6. Which statement is true about the TCP/IP and OSI models?

The TCP/IP network access layer has similar functions to the OSI network layer.

7. What is an advantage of using standards to develop and implement protocols?

A particular protocol can only be implemented by one manufacturer.

Different manufacturers are free to apply different requirements when implementing a protocol.

Standards provide flexibility for manufacturers to create devices that comply with unique requirements.

9. What are proprietary protocols?

protocols developed by private organizations to operate on any vendor hardware

protocols that can be freely used by any organization or vendor

a collection of protocols known as the TCP/IP protocol suite

10. What is an advantage of network devices using open standard protocols?

Network communications is confined to data transfers between devices from the same vendor.

Internet access can be controlled by a single ISP in each market.

Competition and innovation are limited to specific types of products.

11. Refer to the exhibit. If Host1 were to transfer a file to the server, what layers of the TCP/IP model would be used? 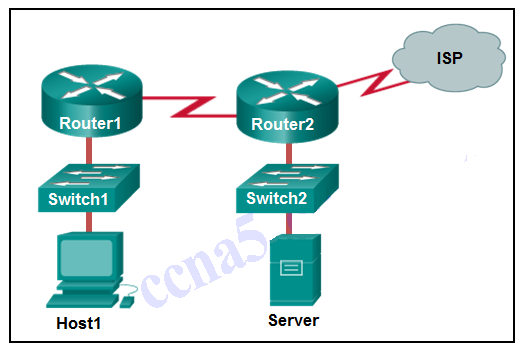 only application and Internet layers

12. Which three layers of the OSI model are comparable in function to the application layer of the TCP/IP model? (Choose three.)

13. At which layer of the OSI model would a logical address be encapsulated?

14. Which PDU format is used when bits are received from the network medium by the NIC of a host?

15. Which PDU is processed when a host computer is de-encapsulating a message at the transport layer of the TCP/IP model?

16. Refer to the exhibit. HostA is attempting to contact ServerB. Which two statements correctly describe the addressing that HostA will generate in the process? (Choose two.) 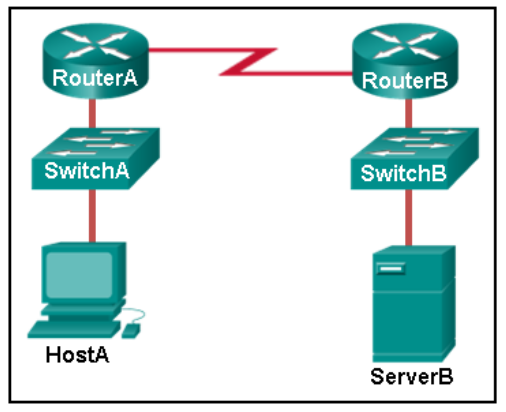 A packet with the destination IP address of RouterB.

A frame with the destination MAC address of SwitchA.

A packet with the destination IP address of RouterA.

A frame with the destination MAC address of RouterA.*

A packet with the destination IP address of ServerB.*

A frame with the destination MAC address of ServerB.

17. Which address does a NIC use when deciding whether to accept a frame?

18. What will happen if the default gateway address is incorrectly configured on a host?

The host cannot communicate with other hosts in the local network.

The switch will not forward packets initiated by the host.

The host will have to use ARP to determine the correct address of the default gateway.

The host cannot communicate with hosts in other networks.*

19. Which characteristic describes the default gateway of a host computer?

20. Match each description to its corresponding term. (Not all options are used.)

21. Match the protocol function to the description while taking into consideration that a network client is visiting a web site. (Not all options are used.)

governing the way a web server and a web client interact -> application protocol
talking the segments from the transport protocol, encapsulating them into packets, and assigning them with appropriate addresses -> internet protocol
preparing packets to be transmitted over the network media -> network access protocol
– not scored –
managing the individual conversation between web servers and web clients -> transport protocol

22. Match the description to the organization. (Not all options are used.)

ISOC -> The organization promotes the open development, evolution, and use of the internet throughout the world
ISO -> This organization is the largest developer of international standars in the world for a wide variety of products and services. It is know for its Open System Interconection (OSI) reference model.
IANA -> This organization is responsible for overseeing and managing IP address allocation, domain name management, and protocol identifiers