1. A company uses a cloud-based payroll system. Which cloud computing technology is this company using?

2. For a data center, what is the difference in the server virtualization data traffic compared with the traditional client-server model?

3. Which component in a traditional infrastructure device provides Layer 2 and Layer 3 functions to create data paths within a network?

4. Which network traffic management technology is a basic element in SDN implementations?

5. Which type of hypervisor would most likely be used in a data center?

6. Which is a characteristic of a Type 1 hypervisor?​

Explanation: Type 1 hypervisors are installed directly on a server and are known as “bare metal” solutions giving direct access to hardware resources. They also require a management console and are best suited for enterprise environments.​

8. What pre-populates the FIB on Cisco devices that use CEF to process packets?

the routing table*
the adjacency table
the ARP table
the DSP

9. What is a function of the data plane of a network device?

10. Which statement describes the concept of cloud computing?

Explanation: Cloud computing is used to separate the application or service from hardware. Virtualization separates the operating system from the hardware.

11. Which cloud model provides services for a specific organization or entity?

Explanation: Private clouds are used to provide services and applications to a specific organization and may be set up within the private network of the organization or managed by an outside organization.

12. What two benefits are gained when an organization adopts cloud computing and virtualization? (Choose two.)

provides a “pay-as-you-go” model, allowing organizations to treat computing and storage expenses as a utility*
enables rapid responses to increasing data volume requirements*
distributed processing of large data sets in the size of terabytes
elimination of vulnerabilities to cyber attacks
increases the dependance on onsite IT resources

Explanation: Organizations can use virtualization to consolidate the number of required servers by running many virtual servers on a single physical server. Cloud computing allows organizations to scale their solutions as required and to pay only for the resources they require.

13. Which type of Hypervisor is implemented when a user with a laptop running the Mac OS installs a Windows virtual OS instance?

Explanation: Type 2 hypervisors, also know as hosted hypervisors, are installed on top of an existing operating system, such as Mac OS, Windows, or Linux.

14. A small company is considering moving many of its data center functions to the cloud. What are three advantages of this plan? (Choose three.)

Explanation: Cloud computing offers many advantages to the company. Since the cloud data storage and processing facilities are owned by third-parties, the company does not need to be concerned about how it will handle increasing data storage and processing demands with its own data center equipment. The company can easily increase or decrease processing power and storage capacity based on need. Also, cloud services are billed by usage, so the company does not have the costs of supporting its own expensive data center that is not always used to maximum capacity.

15. How does virtualization help with disaster recovery within a data center?

Explanation: Live migration allows moving of one virtual server to another virtual server that could be in a different location that is some distance from the original data center.

16. What technology allows users to access data anywhere and at any time?

17. Which action takes place in the assurance element of the IBN model?

Explanation: The assurance element of the IBN model is concerned with end-to-end verification of network-wide behavior. 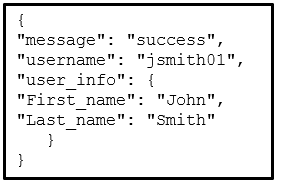 Which data format is used to represent the data for network automation applications?

19. What is the function of the key contained in most RESTful APIs?

It is the top-level object of the API query.
It is used to authenticate the requesting source.*
It represents the main query components in the API request.
It is used in the encryption of the message by an API request.

Explanation: Many RESTful APIs, including public APIs, require a key. The key is used to identify the source of the request through authentication.

21. Which term is used to describe a set of instructions for execution by the configuration management tool Puppet?

Explanation: The configuration management tool Puppet uses the name Manifest to describe the set of instructions to be executed.

22. Which term is used to describe a set of instructions for execution by the configuration management tool SaltStack?

Explanation: The configuration management tool SaltStack uses the name Pillar to describe the set of instructions to be executed.

23. Which scenario describes the use of a public API?

It requires a license.
It can be used with no restrictions.*
It is used between a company and its business partners.
It is used only within an organization.

Explanation: Public, or open, APIs have no restrictions and are available to the public. Some API providers do require a user to obtain a free key or token prior to using the API in order to control the volume of API requests received and processed.

Explanation: Like JSON, YAML Ain’t Markup Language (YAML) is a data format used by applications to store and transport data. YAML is considered a superset of JSON.

25. Which RESTFul operation corresponds to the HTTP GET method?

Explanation: RESTful operations correspond to the following HTTP methods (shown to the left with the RESTful operation on the right):
POST > Create
GET > Read
PUT/PATCH > Update
DELETE > Delete

26. Which technology virtualizes the network control plane and moves it to a centralized controller?​

27. What are two functions of hypervisors? (Choose two.)

28. What is a difference between the functions of Cloud computing and virtualization?

29. How is the YAML data format structure different from JSON?

It uses indentations.*
It uses end tags.
It uses hierarchical levels of nesting.
It uses brackets and commas.

Explanation: The structure in YAML is defined by indentations rather than brackets and commas.

30. What is the most widely used API for web services?

Explanation: REST accounts for more than 80% of all API types used for web services, making it the most widely used web service API.

It is a way to store and interchange data in a structured format.
It is an architecture style for designing web service applications.*
It is a human readable data structure that is used by applications for storing, transforming, and reading data.
It is a protocol that allows administrators to manage nodes on an IP network.

Explanation: REST is not a protocol or service, but rather a style of software architecture for designing web service applications.

32. What is a difference between the XML and HTML data formats?

Explanation: XML is a human readable data structure used to store, transfer, and read data by applications. Like HTML, XML uses a related set of tags to enclose data. However, unlike HTML, XML uses no predefined tags or document structure.

33. To avoid purchasing new hardware, a company wants to take advantage of idle system resources and consolidate the number of servers while allowing for multiple operating systems on a single hardware platform. What service or technology would support this requirement?

34. Match the term to the RESTful API request http://www.mapquestapi.com/directions/v2/route?outFormat=json&key=KEY&from=San+Jose,Ca&to=Monterey,Ca component. (Not all options are used.) 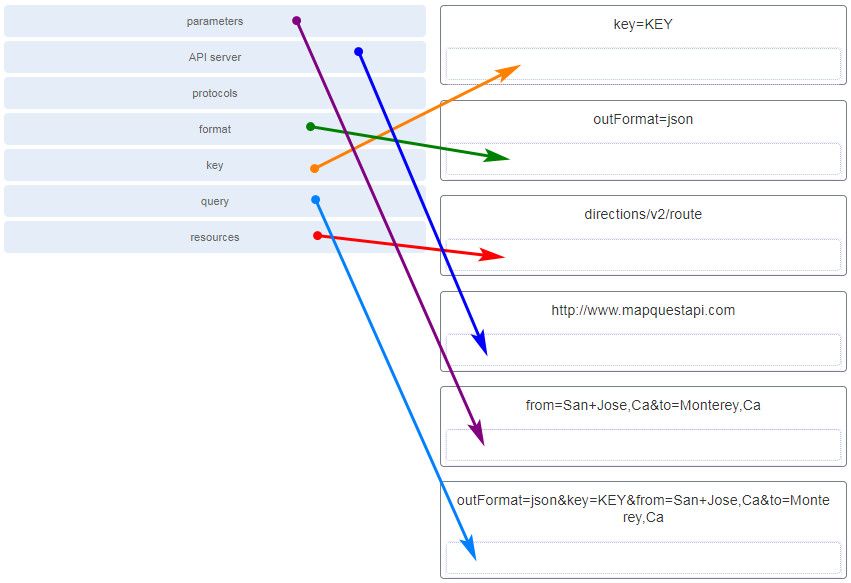 35. Which cloud computing opportunity would provide the use of network hardware such as routers and switches for a particular company?

Explanation: This item is based on information contained in the presentation.
Routers, switches, and firewalls are infrastructure devices that can be provided in the cloud.

36. What component is considered the brains of the ACI architecture and translates application policies​?

37. Which statement describes the concept of cloud computing?

Explanation:Cloud computing is used to separate the application or service from hardware. Virtualization separates the operating system from the hardware.

38. In which situation would a partner API be appropriate?

Explanation: Partner API programs incorporate collaboration with other business. They facilitate communication and integration of software between a company and its business partners.

39. Because of enormous growth in web traffic, a company has planned to purchase additional servers to help handle the web traffic. What service or technology would support this requirement?